Last Friday M1 travelled to the Henley Royal Regatta qualifiers, in an attempt to qualify for the Temple Challenge Cup for university eights. The crew was unchanged from the eight that raced the May Bumps two weeks previously. Unfortunately, despite some hard training, they narrowly missed out, posting a time of 7:20.2 – four seconds short of the mark. Henley Royal Regatta is the pinnacle of club rowing in the UK and while the crew is very disappointed not to be taking part, they hope this sets a precedent for Pembroke sending more crews in years to come. 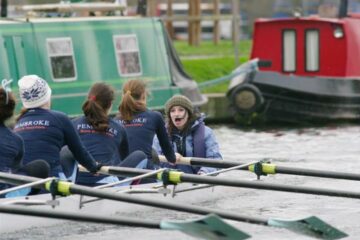 Overview – by Scott Warden (Overall Captain) It has been fantastic to see so many boats this term out training on the water. PCBC currently have a very healthy membership of 78 active rowers consisting Read more…

Pembroke’s novice crews made a good start to their racing career in Clare Novices’ Regatta. Everyone experienced their first taste of winning on a race on the river. The novices demonstrated their strong technical abilities, Read more…