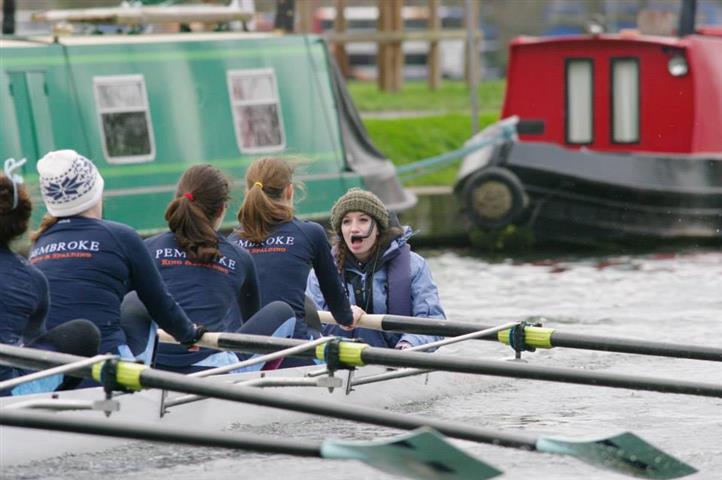 It has been fantastic to see so many boats this term out training on the water. PCBC currently have a very healthy membership of 78 active rowers consisting of M1, M2 (IV), NM1, NM2, NM3, W1, NW1 and NW2. The LBCs have been fantastic in managing and instigating such a large intake of novices, which will stand PCBC well for future terms and years. The Pembroke presence on the river during the recent Fairbairn races has been great to see. PCBC are due to embark on a training camp in early January, to Seville in Spain. This will be invaluable training for both senior and novice alike, and will propel us well into Lent term.

PCBC would like to thank the continued support of the Master and Kevin, and also the contribution of Andrew Watson (AKA “Gripper”) in providing the role of Head Novice Coach.

If any alumni are interested in contributing any coaching to PCBC, please do get in touch on captain@pembrokecollegeboatclub.com

This Michaelmas term M1 have been mixing up the training schedule somewhat, focussing mainly on working in 4s in the first half of term, but also putting out all rowers in sculling boats, some for the first time. So it wasn’t until week 5 that we blew the dust off the Geoffrey Perret and got out in an VIII+.

It would be fair to say that M1 had a “rocky” run up to Fairbairns this year. Illness and injury meant that we went through four different men in the bow seat in the last two weeks of training, and the crew that raced in Fairbairns had never raced together. Nonetheless the crew that turned up on the start line had plenty of competitive spirit. Our cox Arun confidently ran us through the race plan for the final time that day on the start line, condensed into 5 words: Rhythm – Power – Togetherness – Shape – Build.

We de-kitted ready for the race, waiting for the command, only to find that Caius were having issues on the start line, and were getting friendly with a barge. So it was after another few minutes that we were given the all clear, and rowed off, pressing the rate up across the start line. We hit a steady 31 and started to execute the race plan.

The first quarter of the race we aimed to “keep the powder dry”, not exhausting ourselves in the corner heavy section past the boathouses. The emphasis was constructing a rhythm to maintain throughout the rest of the race.

As we came past the combined boathouses, we switched the focus, making sure that we build he power in the leg-drive without “kicking” at the catch. This worked well, and the boat speed increased as we came into the straighter section of the course.

Next came the Reach. This was where the pain really began to set in, and for me this meant fixing my eyes on the neck of the man in front and following his movements. I dimly remember at the end of the Reach the call that we were going to push for 10 through the Plough once around Ditton corner.

With shouts of affirmation from the crew we picked it up for a strong section, which continued around Grassy, and then once again, picked it up again as we came onto First Post reach. We peaked at 33 as we moved through the final 30 seconds of the race, crossing the line in 15:44.9

This placed us as the 13th fastest college M1 from 23. While a reasonably disappointing end result, this term has been a fantastically fun term of rowing for M1, and we are all training hard over the break looking forward to training camp in Seville, Spain in January.

W1 had a good row at Fairbairns. Throughout the race we rowed with confidence, responding well to the calls of our cox (Mairi Innes); who we also have to thank for some excellent lines. The lineup of rowers featured some well-seasoned Valencians and also 2 new members of College. The crew worked well together, with good commitment throughout the race. This is something we hope to build on next term. We’re all looking forward to some hard work and further technical development in Seville!

To say that M2 this term has been in a state of flux is something of an understatement: due to a series of minor injuries and illnesses, it was often difficult to send out a consistent crew. The “Great Coxing Drought” at the start of term meant that PCBC had to resort to paying coxes from other clubs and colleges to cover our sessions. However, this turned out to be a blessing in disguise, as this meant that the crew experienced a number of different coxing styles, and sessions with some of the best coxes on the Cam. By the end of term the newest generation of PCBC coxes had completed their “basic training” (a round robin of the various novice boats and senior crews). Newbie cox & rower James Roberts stepped up to steer M2, and did an excellent job at Fairbairn’s, remaining calm and in control, spurring the crew on, steering well and remaining unperturbed despite attempts to cox from the 2-seat (from M1 cox and M2 super-sub Arun Lobo).

It has often been the case this term that availabilities were such that the full IV could not be sent out. Rather than let this get in their way, stern pair Thayne Forbes & Will Snowden requested that I send them out in a double: initially a very challenging row as neither of them had done much sculling, but they very soon mastered the art (not surprising with experienced coaches such as Matt Castle & Paul Meadows giving them guidance).

As fate would have it, it was in the week of Fairbairns that the most major maladies struck, with 2-man Dominik putting his back out, and 3-man Will Snowden becoming ill (shortly after agreeing to sub into M1: the Curse of the First Boat came into play!). Luckily, experienced rower Arun and NM1 novice (although you wouldn’t believe it) Simrun Basuita both agreed to step in. Given the number of subs and the relative inexperience of the cox, I had feared that the crew’s Fairbairns row wouldn’t not be a fitting testament to the efforts of the crew this term, and the improvements that they have all made. As it happened, this was not the case: although the time was nothing spectacular, the crew were not lacking on individual technique or fitness, but togetherness, not surprising given that they were a scratch IV. The commitment to making the boat move was there, and this cannot be trained.

For next term, I am looking forward to expanding the crew to an VIII; I will give all members of the club a chance to trial for the boat, and hope to see plenty of the novices getting involved (thy have already demonstrated keenness and ability, the first building blocks of a rapid VIII!).

The Fairbairn Cup on 5th December brought our extraordinarily dedicated (not a single outing missed by anyone!) and competitive novice men their first chance to demonstrate the skills they’d been honing all term. The presence of our Head Novice Coach, Andrew “Gripper” Watson, gave us a technical edge on other crews on the river: so much so that the call of “come by” practically became their motto.

An impressive depth of talent in the squad of twenty-six novices allowed us, weeks in advance of Fairbairn’s, to set no fewer than three (!) novice men’s boats. Thus, the crews were able to develop a high degree of cohesion and a striking display of coordinated neatness in their stroke — not to mention a great camaraderie that spurred us on into the final of Queens’ Ergs and that spirit obtained during a clearly superior showing at Clare Novice Regatta.

A blustery gray day saw us row up to the start of the Fairbairns course confident that by maintaining the term’s strong focus on technique we could register a good time. Rating a steady 28, the first two boats to race rowed very competently (no crabs, no washing out), passing the boat house proudly and pushing off Chesterton footbridge and the railway bridge. With winds gusting up to 40mph the reach was extraordinarily choppy. Nevertheless, both crews maintained concentration during the final push and launched themselves over the line in style. The crew dubbed “Pembroke” (the others were “College” and “Cambridge”) finished ninth overall, a mere seven seconds behind fourth place. All crews had reason to be proud of their achievements.

Alas by the time of the afternoon division gusts had turned into gales and the “Cambridge” crew, having marshalled by Jesus lock, were forced to shelter in Caius boat house. From there they watched with mixed amusement and apprehension as the storm scattered loosely moored boats (and one or two screaming female crews in them) like pick-up sticks across the river. The race was reluctantly cancelled by a sluggish set of Jesus marshals, and we rowed home after the winds died down a bit. (A tree had fallen into the racing path at Chesterton.) It was a shame that “Cambridge” didn’t get to race and thus show off what would doubtless have been our remarkably fast average time over all three boats. It can only increase the hunger of this term’s novices to mount a glorious Lent campaign, the prospect of which was the subject of enthusiastic discussion at Boat Club Dinner. With a next generation of boaties like this, and with #Pembroke #FairbairnsGlory trending on Twitter, it’s easy to say: Row on PCBC! 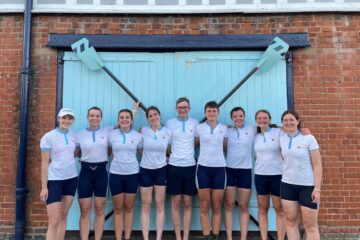 Hello, and welcome to PCBC’s Summer Newsletter!  Senior Boats Words from the Overall Captain May Bumps hadn’t happened since 2019, and as such only a few members of the club had experienced the amazing atmosphere Read more… 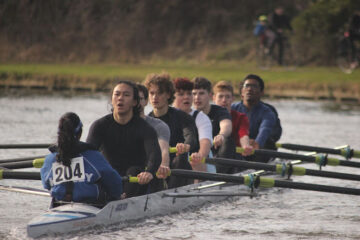 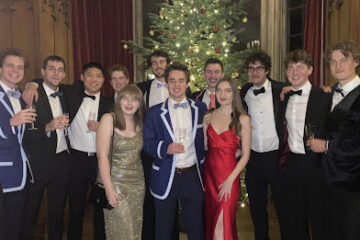 Winter Newsletter 2021 Words from the Overall Captain It has been a very busy Michaelmas for the boat club, but the committee were up to the challenge. Our membership numbers are now at an all Read more…